Montréal is a city of designers: An interview with designers Félix Dagenais and Louis-Xavier Gagnon-Lebrun 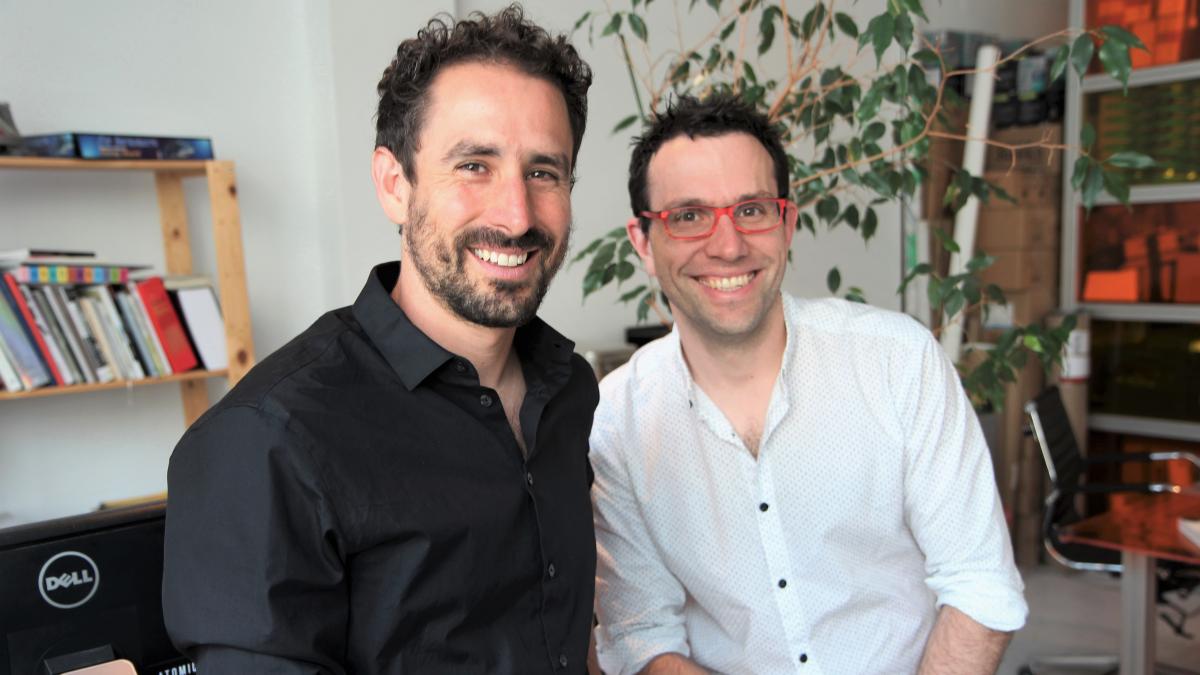 This year on May 17, more than 400,000 admired the show inaugurating the illumination of the Jacques-Cartier Bridge.  This large-scale lighting project was the brain-child of designers Félix Dagenais and Louis-Xavier Gagon-Lebrun from the ATOMIC3 studio created in collaboration with the Moment Factory.

We were privileged to have the Jacques-Cartier Bridge as our canvas. Working on this project was an extraordinary experience.   ̶ Louis-Xavier Gagnon-Lebrun

Félix Dagenais comes from the theatre world and Louis-Xavier Gagnon-Lebrun has a background in architectural lighting design. They met 10 years ago while working for Ex Machina, the multidisciplinary production company founded by world-renowned director Robert Lepage.

Robert Lepage was a terrific mentor. Working at Ex Machina allowed us to develop a unique creative approach and build a network, and provided opportunities to travel.  ̶ Félix Dagenais

Just as atoms combine, the designers joined forces to launch ATOMIC3 in 2012.

In 2011, we won the Create Winter competition, an initiative of the Quartier des spectacles Partnership in collaboration with the Ville de Montréal's Bureau du design. Our project, Shards of Glass, was a light and video installation comprised of 60 glass panels animated by sunlight. This success prompted us to found our studio the following year.  ̶ Louis-Xavier Gagnon-Lebrun

We’re interactive because our creations spark connection and open a dialogue with the public. This interactivity is also expressed through the use of light, video, music, and architecture in our projects.

The duo excels at storytelling through new technologies in order to transform the public space.

This fall, their work Spirit of Place invited visitors to the Montréal Botanical Garden to delve into the spiritual world of aboriginal peoples through the illumination of an immense poplar in the First Nations Garden that poetically evoked the four cycles of Mother Earth.

It was really moving to see visitors take in the piece, become bewitched by the play of light, and applaud at the end of a life cycle. The Spirit of Place will be presented again next fall.  ̶ Félix Dagenais 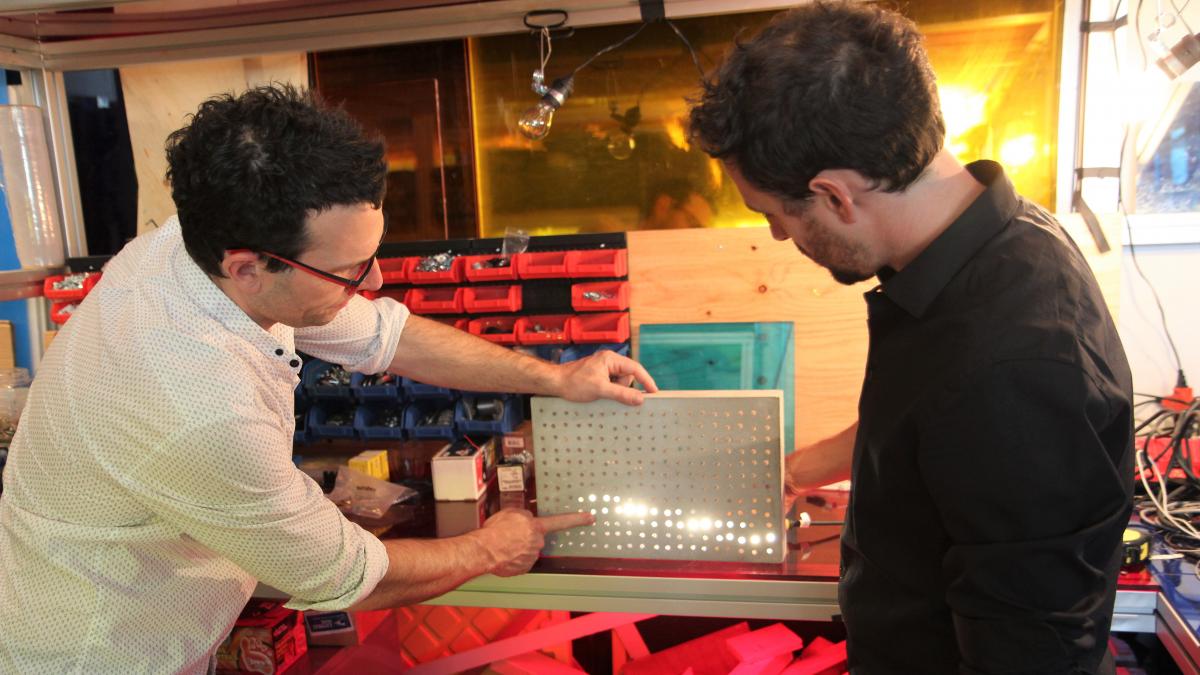 The designers are currently working on a design project for the Earth Garden at the Canadian Embassy in Paris.

This project is a collaboration with Nadia Myre, an artist from Montréal, who will create a work symbolizing sharing between nations. We will illuminate the creation, which will be unveiled in Spring 2018.  ̶ Louis-Xavier Gagnon-Lebrun

ATOMIC3 is among five finalists in a competition to create public art for the refurbishment of the Alexandra Pier in the Port of Montréal.

We’ll submit our proposal on November 27. 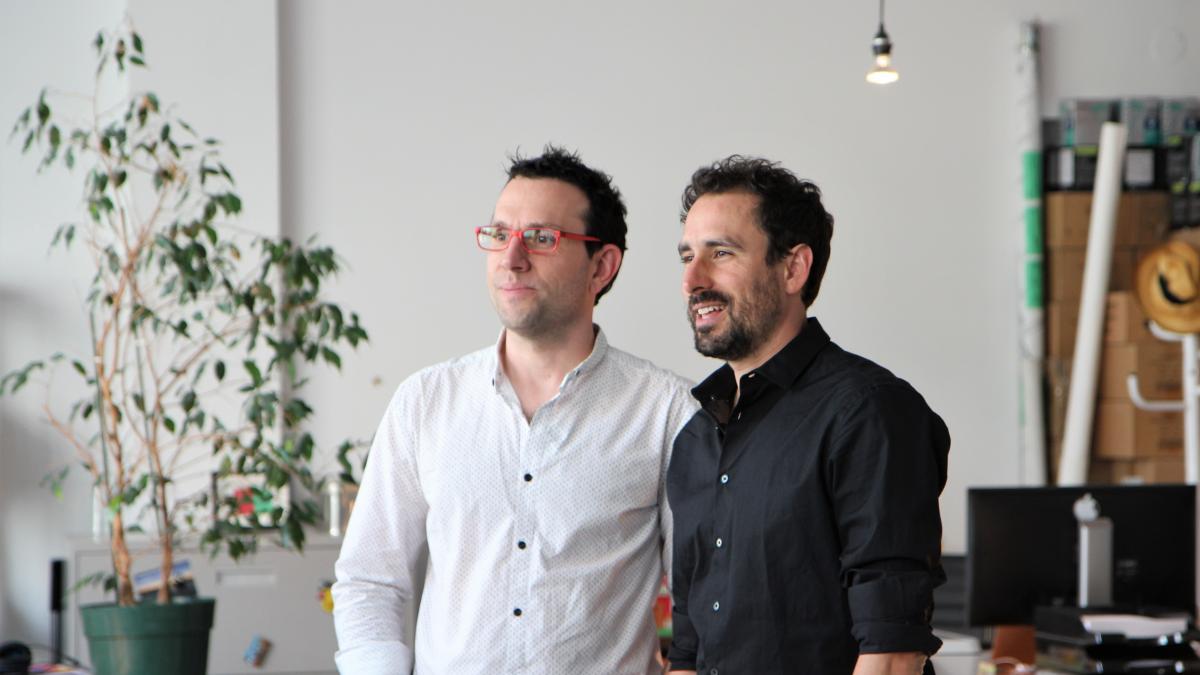 To create unique immersive experiences, Félix Dagenais and Louis-Xavier Gagnon-Lebrun find a wellspring of ideas through travelling and from public art. That said, living in the space that they will bring to life remains their ultimate source of inspiration.

Light is a resource that is very difficult to communicate. To successfully convey emotion through light, we have to play with the space, understand its history, as well as conduct countless lighting tests on site.  ̶ Louis-Xavier Gagnon-Lebrun

Although, with clients like Moment Factory, the City of Montréal, and Cirque du Soleil, ATOMIC3’s two artistic directors could easily envision rapidly growing their studio, that is not their dream.

Becoming a huge company that takes on 50 projects a year is not our ambition. We prefer to choose creative projects that truly inspire us. Our small team of five employees is fine the way it is!  ̶ Louis-Xavier Gagnon-Lebrun

The founders of ATOMIC3 experience Montréal through the city’s events and architecture.

Félix Dagenais praises initiatives like Km3, an open-air public art walk that took place at the heart of the Quartier des spectacles from August 30 to October 15 in 2017. ATOMIC3 created the work Prrr for the occasion.

I find this type of public animation event stimulating both as an artist and as a citizen.

As for his partner Louis-Xavier Gagnon-Lebrun, he enjoys visiting Montréal’s emblematic historic sites like the old U.S. pavilion from Expo 67.

I love the architectural boldness of the Biosphere. Its geodesic dome is a technical accomplishment. Even after 50 year, the building remains contemporary.

Discover all the designers in the Design Montréal Directory who, like Félix Dagenais and Louis-Xavier Gagnon-Lebrun, are a source of pride and ambassadors for Montréal, a UNESCO design city. 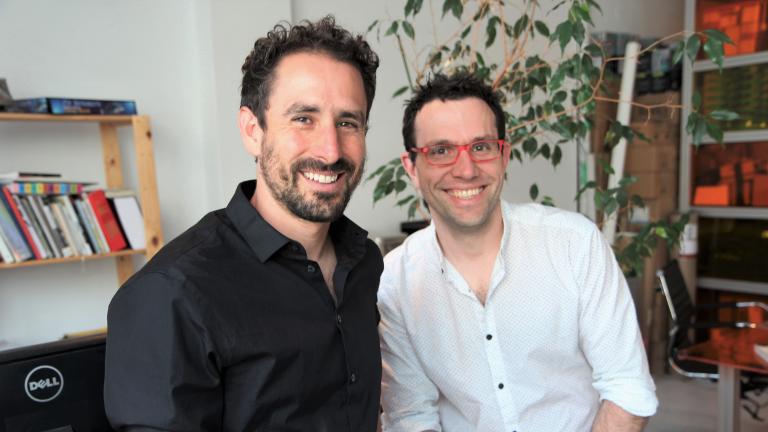