Through Montréal’s membership in the UNESCO Creative Cities Network, local designers have taken advantage of promotional opportunities in Finland, South Korea, China, and France. Read about recent exchanges in the design community and about how Montréal expertise is being shared abroad.

In September, winners of the 2017 Phyllis Lambert Grant, Lambert Rainville and Nicholas Sangaré, visited Helsinki for their professional development project entitled Complements of Architecture. Their trip to the Finnish capital coincided with Helsinki Design Week. In addition to touring many exhibitions, they took part in a number of special events thanks to the UNESCO Creative Cities Network and the first edition of DesignCommons, a travelling platform where numerous internationally renowned professionals in the fields of architecture and design gather to discuss how to make cities better. To study the “complements of architecture,” the designers travelled the streets of Helsinki, carefully observing how various architectural components of the city’s buildings were integrated, and paying particular attention to how Helsinkians interacted with the built environment. They returned to Montréal filled with inspiration and are currently working to design architectural products for the façades of Montréal buildings.

In September, Pierre Fortin, executive director of the Quartier des spectacles Partnership, was a guest speaker at Seoul Design Week. With the theme of “Relationship Design,” the prestigious event was attended by numerous international stakeholders in the world of design. In keeping with this year’s theme, Fortin’s talk used actual projects carried out in the Quartier des spectacles to illustrate the potential of design and culture for creating relationships, in particular through developing and enlivening public spaces. Whatever their form – squares, streets, parks, gardens, esplanades – public spaces are a territory, a place where people can belong, live together, meet, and share. People live in relation to the territory, and the territory is the stage on which people form relationships with each other. How public spaces are developed and enlivened can therefore be key aspects of facilitating these relationships between various components of a territory. This is especially the case with the Luminothérapie competition, initiated eight years ago in partnership with the Ville de Montréal’s Bureau de design, which results in a new artistic and participative installation every winter on Place des Festivals. The over 20 works of the public art exhibition KM3, installed in 2017 as part of Montréal’s 375th anniversary celebrations, were also used as an example of the different relationships that can be created in public spaces through design and art. In their third year of existence, the Jardins Gamelin also served to illustrate the many vectors through which relationships can be created, from development, to social intervention, to various hosted activities. Fortin left Seoul having made many valuable contacts with influential figures in the design world and with the sense of having contributed to the renown and recognition of Montréal as a UNESCO City of Design and a cultural capital.

In September, the Bureau du design, in an effort to support the next generation of designers, selected architects and designers Pierre-Luc Filion and Samuel Guimond of the organization Manœuvres to represent Montréal as a UNESCO City of Design at Beijing Design Week 2017. The pair were invited to present their project to redevelop Griffintown’s Wellington Control Tower into a research and creative centre that incorporates urban design, visual arts, and public appropriation of the space. After nearly two years of work developing the space, in partnership with Ateliers Créatifs Montréal, they were able to share their vision, development process, and the specificities of urban design in Montréal. They also took part in the Creativity 2030 Summit, where they explained their perspectives on the benefits of creativity on sustainable development in cities. As designers with a highly pragmatic approach to these issues, they were able to build bridges with a number of delegates from the UNESCO Creative Cities Network in attendance – Melbourne, Sydney, Linz, Tel-Aviv, Santos, Helsinki, and Detroit. They feel that this wonderful opportunity to meet important international stakeholders opened doors for future partnerships between the Control Tower and other innovative initiatives around the world. In addition to taking part in many interviews and tours, the young designers made the acquaintance of many Chinese counterparts and learned more about their culture. The Bureau du design thanks the city of Beijing for this generous invitation.

In the beginning of October 2017, the interactive designer David Somiah Clark travelled to Saint-Etienne, France to deliver a master class, give a talk, and meet with students to talk about his interactive vest, beAT. The vest, featured in the exhibition Are you talking to me? at the Cité du design, explores an alternative perspective on the nature of connected objects. beAT exposes the wearer’s physiological state by translating the wearer’s heart rate into the changing form of its shoulders. While in Saint-Etienne David Somiah Clark discussed his project with designers, students, and business owners. Saint-Etienne’s Cité du Design were wonderful hosts providing David with a tour of the city’s Museum of Art and Industry, as well as a day trip to Firminy to visit Le Corbusier’s renown architectural complex. The trip was a great opportunity to share approaches across Montréal and Saint-Etienne’s design communities.

These are in addition to other promotional opportunities supported by Montréal’s Bureau du design. 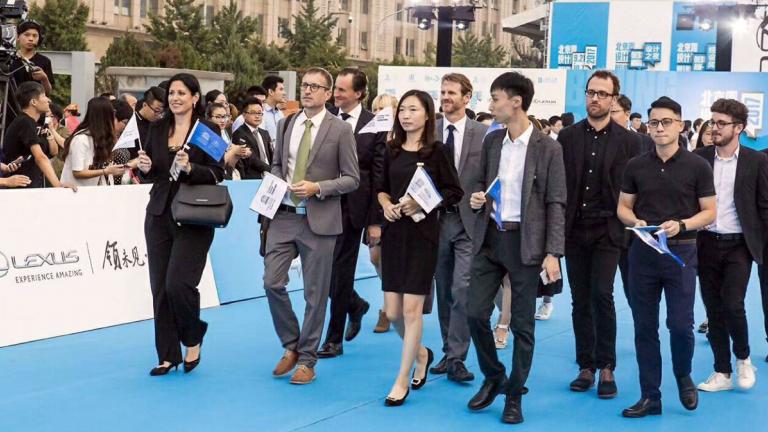 Delegation at the Beijing Design Week 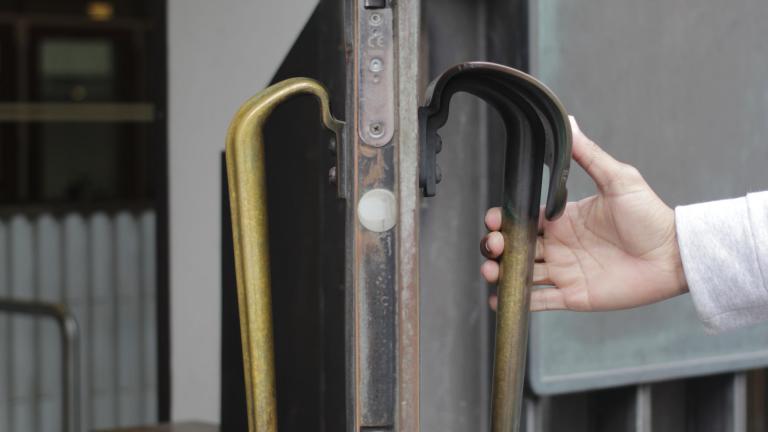 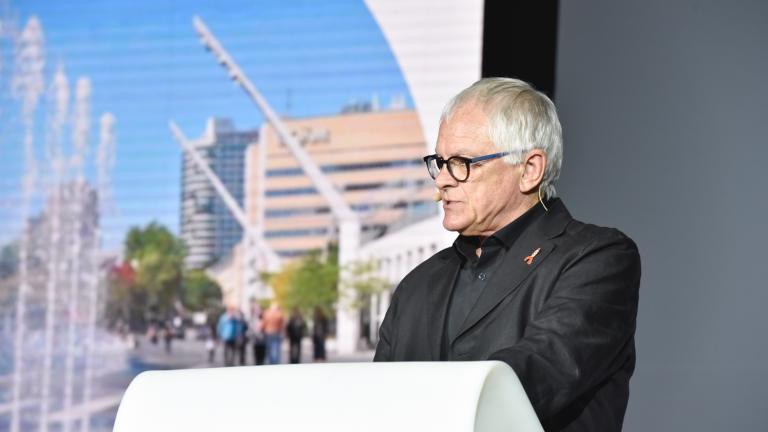 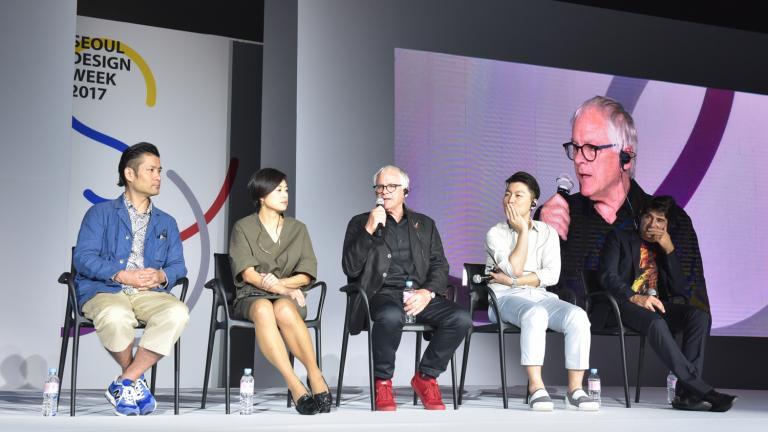 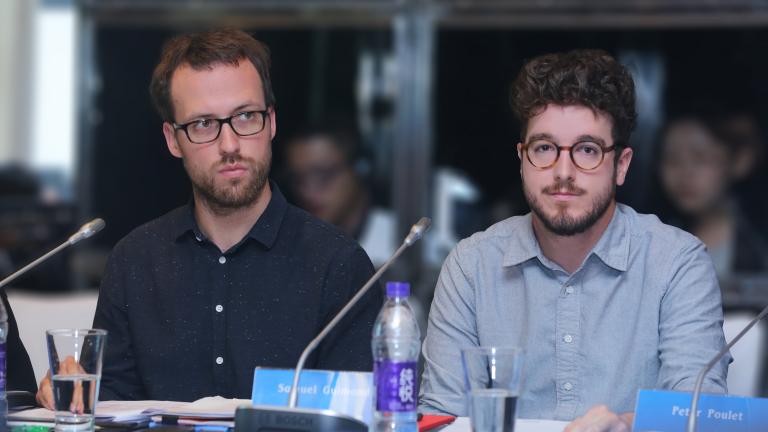 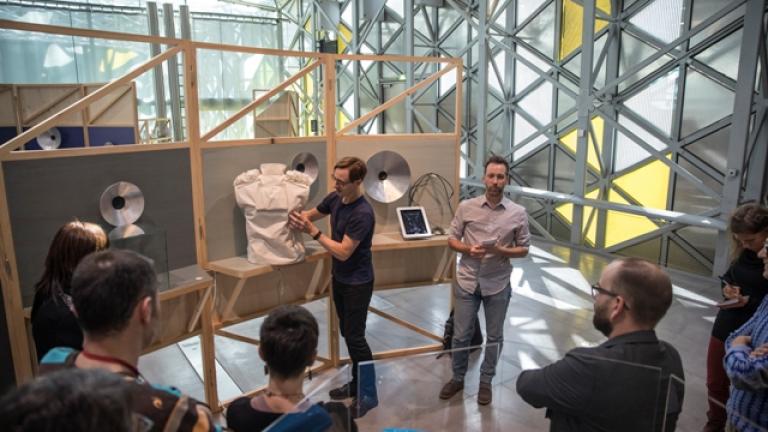