The place fraîcheur, or cooling space, in Place de l’Acadie, bound by Henri-Bourassa and De l’Acadie boulevards and the Autoroute des Laurentides, has been inaugurated.

The new green space, developed at a cost of $1,080,000 and created by NIPpaysage following a Québec-wide design competition, includes a cooling island, the first of its kind in the Borough of Ahuntsic-Cartierville, as well as a public square, grassy spaces for large-scale gatherings, a children’s play area, and a wide variety of traffic zones. 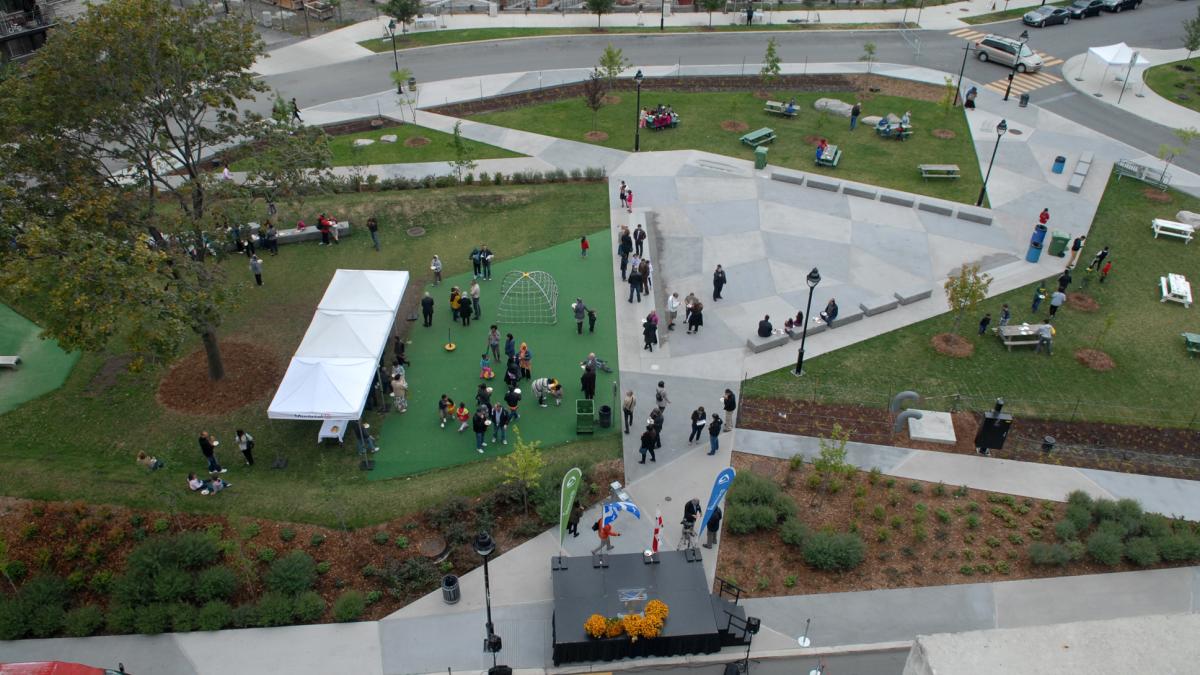 The landscaping of this new park in Place de l’Acadie embodies the spirit of the neighbourhood as it was in the 1960s, as well as the present day. It will provide enhanced quality of life for residents of this district, several areas of which are prone to the heat island effect. It includes a misting system that will allow citizens to cool off during heat waves. The cooling island is among the special projects of the Ville de Montréal’s park facilities improvements program.

Place de l’Acadie Park is a key component in the urban fabric of the Cité de l’Acadie residential neighbourhood, which has been fully revitalized. With its cooling effect, it can be called the Cité’s “lung.” In addition, the grassroots movement that accompanied the undertaking of this large-scale project is echoed in the new park’s role as the heart of the district: a place to gather, relax and hold a variety of activities benefiting all residents.

Montréal, UNESCO City of Design… right down to its parks!

The design competition was part of the Montréal, UNESCO City of Design initiative. NIPpaysage gathered statements and ideas from neighbourhood residents as part of the process of designing a space that would meet their needs and expectations. The park is ringed by planted embankments and ecological drainage pits, with the play and relaxation areas integrated in a very natural manner. The designers treated the park as a huge entrance hall, with paving reminiscent of the random stonework patterns in the lobbies of the buildings that formerly stood on the site. These patterns contain the street addresses of those buildings, engraved on metal plaques set into the ground.

The park site was developed with the financial support of the Government of Québec, the Ville de Montréal and the Borough of Ahuntsic-Cartierville. The Ministère de la Santé et des Services sociaux contributed $354,702 as part of a joint call for proposals with the Institut national de santé publique du Québec for projects to combat the heat island effect by redeveloping Place de l’Acadie as well as Place Henri-Bourassa. The City and the Borough invested $725,300, drawn from the Programme triennal d’immobilisations Parcs (three-year capital expenditures program for parks), part of which was earmarked under the Programme d’amélioration des aménagements dans les parcs (PAAP, or park improvement program). Place de l’Acadie Park also received partial funding from the Fonds vert (Green Fund), under Action 21 of the Government of Québec’s Plan d’action 2006–2012 sur les changements climatiques (2006–2012 Climate Change Action Plan, known by its French acronym PACC). 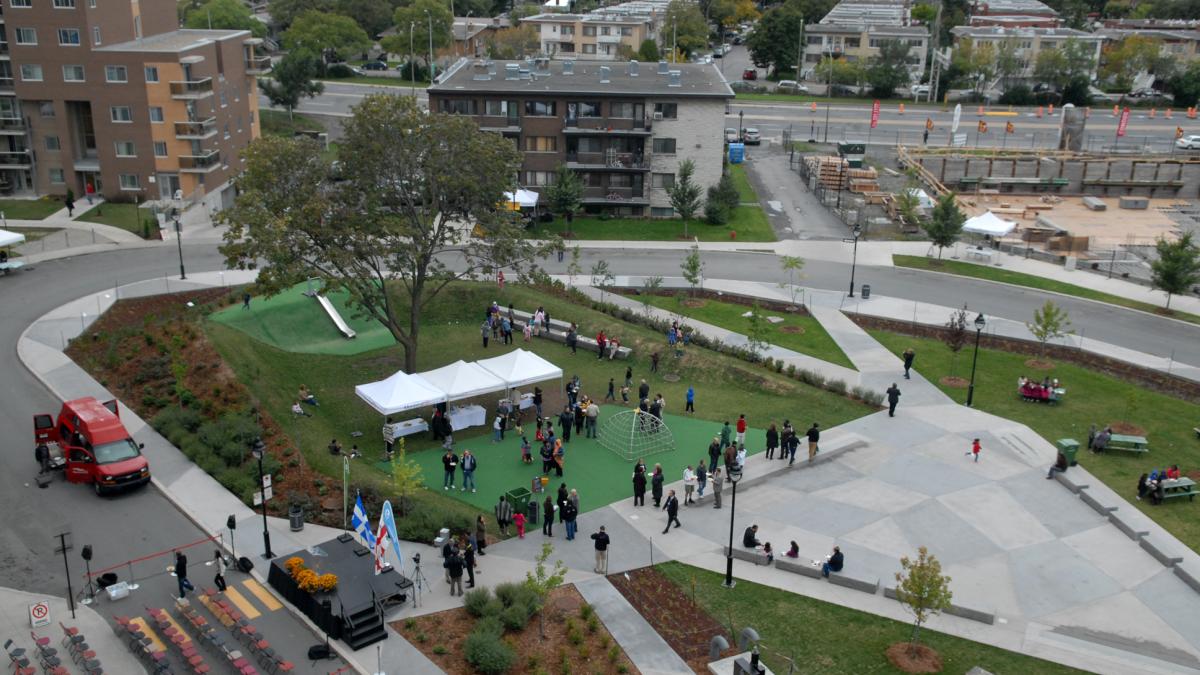 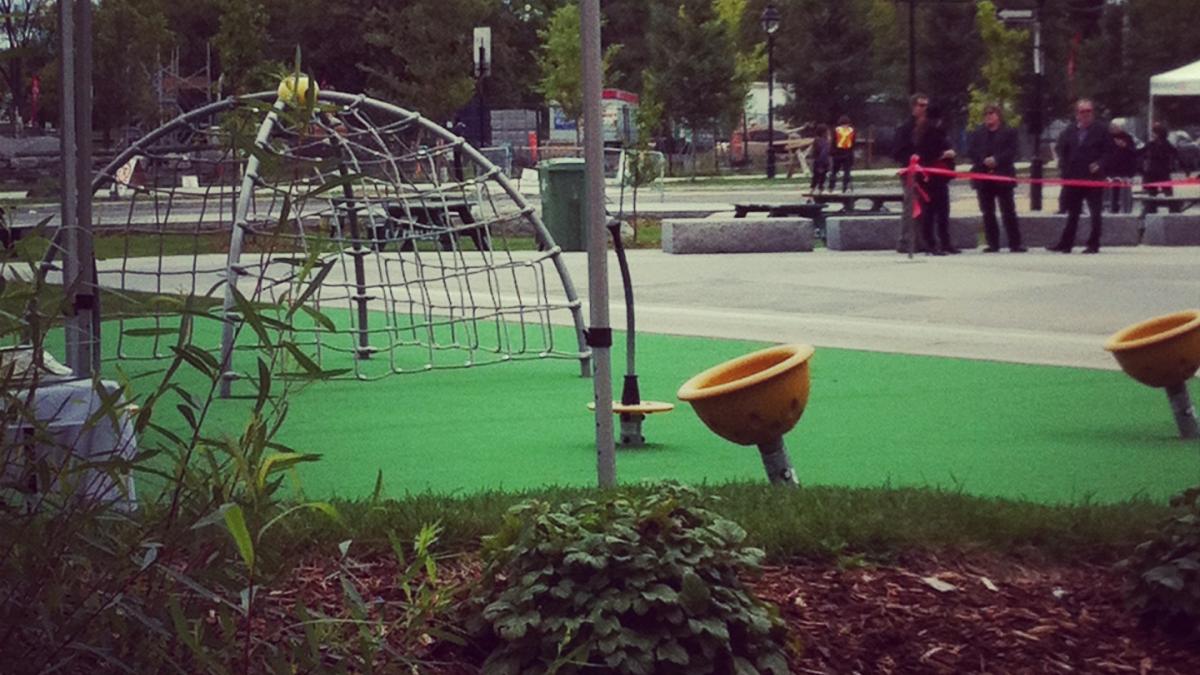